The Millennium’s Most Important Building

Whenever I get up to New York I try to work some ‘play’ time into my schedule.  For me, ‘play time’ in NYC involves cameras and architecture!  Whether it consists of wandering out from where ever I happen to be and seeing what there is to be seen, or heading out with a plan, there’s always great architecture to be found.

On a recent trip, I was on a mission...   my target:  what’s been called “the millennium’s most important building,”  Ludwig Mies van der Rohe‘s Seagram’s Building at 375 Park Ave.  I was certainly aware of the Seagram’s Bldg., but my travels had never taken me by it (I guess I don’t often travel in Park Ave. circles!).  I set out to rectify the oversight.

In addition to being perhaps “the millenniums most important,” it may also be it’s most understated.  It’s ultra-clean lines, and it’s dark edifice of ‘whiskey-brown’ tinted glass and bronze-clad structural steel combine to make the building appear to retreat from the eye.  And placed as it is on the rear-third of it’s site and fronted by an expansive plaza, the building sits almost hidden by it’s protruding neighbors until your approach reveals it’s presence.  Once in sight, it’s hard to pull your eye away.

The Seagram’s inspires contemplation.  Gazing on the building while strolling around it, and the serenity of the design encourages a stroll, the eye is repeatedly delighted as the simple lines evolve into one pleasing composition after another, and subtle details reveal themselves.  I found my stroll interrupted time and again as the building demanded that I dwell on it.

Mies is known for popularizing the phrases ‘less is more’ and ‘God is in the details’ (though he coined neither), and they have never been more eloquently stated than in the Seagram.  It’s pleasing proportions and serene, rooted feel spring from the precise execution of simple mathematical ratios, here, an 8.5 meter grid. This mathematical precision is clearly evident in my photograph above.

And Mies noted attention to detail is evident throughout the building.  As just a few examples:  when American building codes dictated that the steel structure of the building be hidden beneath fire-proof concrete, an anathema to the International Style championed by Mies where ‘structure is spiritual’, he added non-structural, bronze-clad I-beams to the edifice to echo the concealed structure.  To keep the facade clean, Mies specified window blinds which only operated in three positions - fully open, halfway open, or fully closed, to reduce the jumbled appearance when window blinds are drawn irregularly, and he omitted window sills completely.  And, in fact, due to the material choices and custom-made details (largely specified by Philip Johnson, who designed the interior spaces) the building became -- per built square meter -- the most expensive skyscraper ever, costing approximately twice as much as a more pedestrian structure would have.

As Herbert Muschamp, chief architecture critic for The New York Times, remarked in proposing the Seagram’s as the ‘millennium’s most important,’  the building combines the long-time esthetic poles of western architecture:  Classical and Gothic.  “The classical elements are more obvious:  the symmetry of its massing on the raised plaza;  the tripartite division of the tower into base, shaft and capital;  the rhythmic regularity of its columns and bays;  the antique associations borne by bronze.  While the Gothicism is subtler, it is evident in the tower's soaring 516 feet, the lightness and transparency of the curtain wall, the vertical emphasis conveyed by the I-beams attached to the glass skin and the cruciform plan of the tall shaft and the lower rear extension. Indeed, the Gothic cathedral was the prelude to the whole of modern glass architecture.” 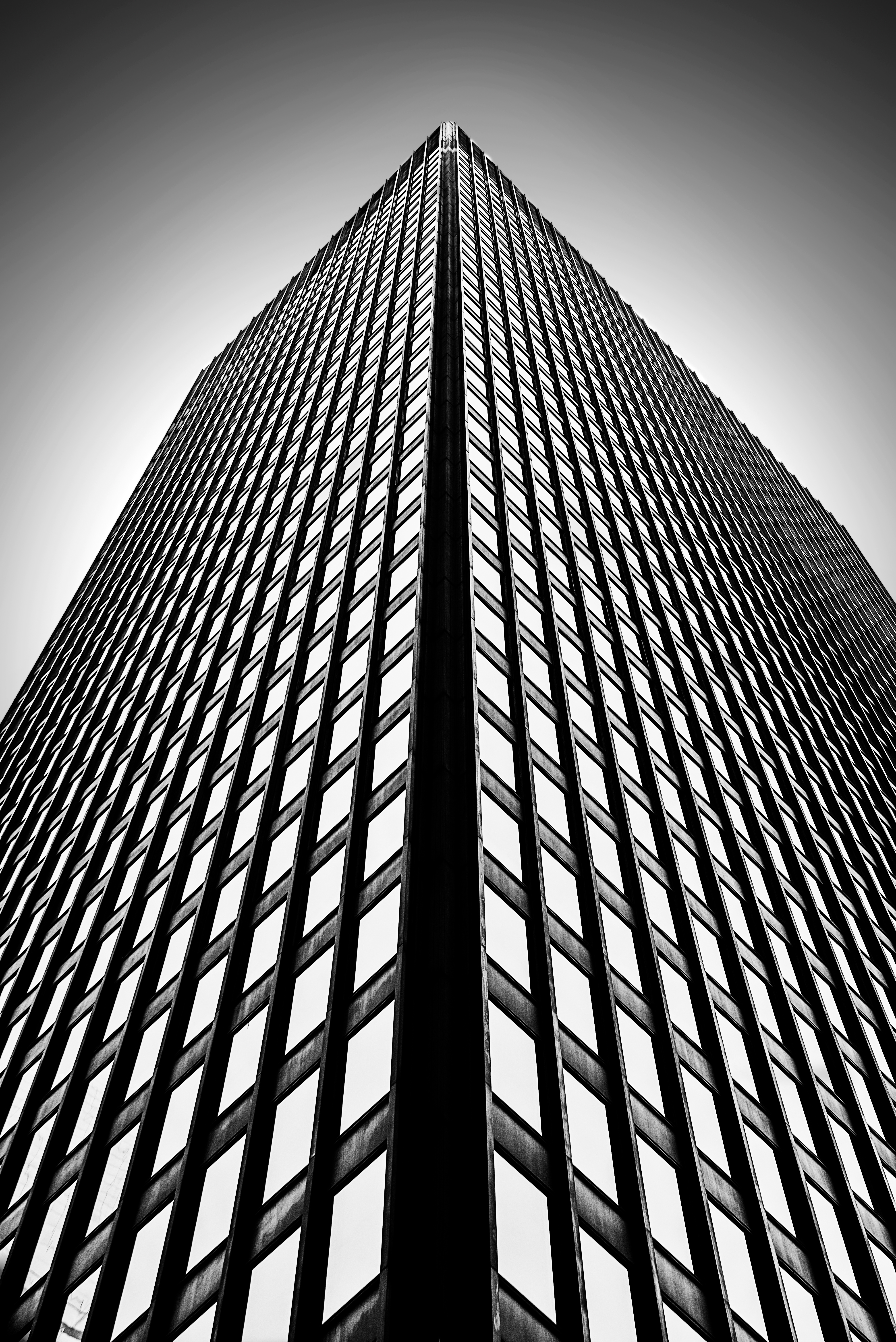 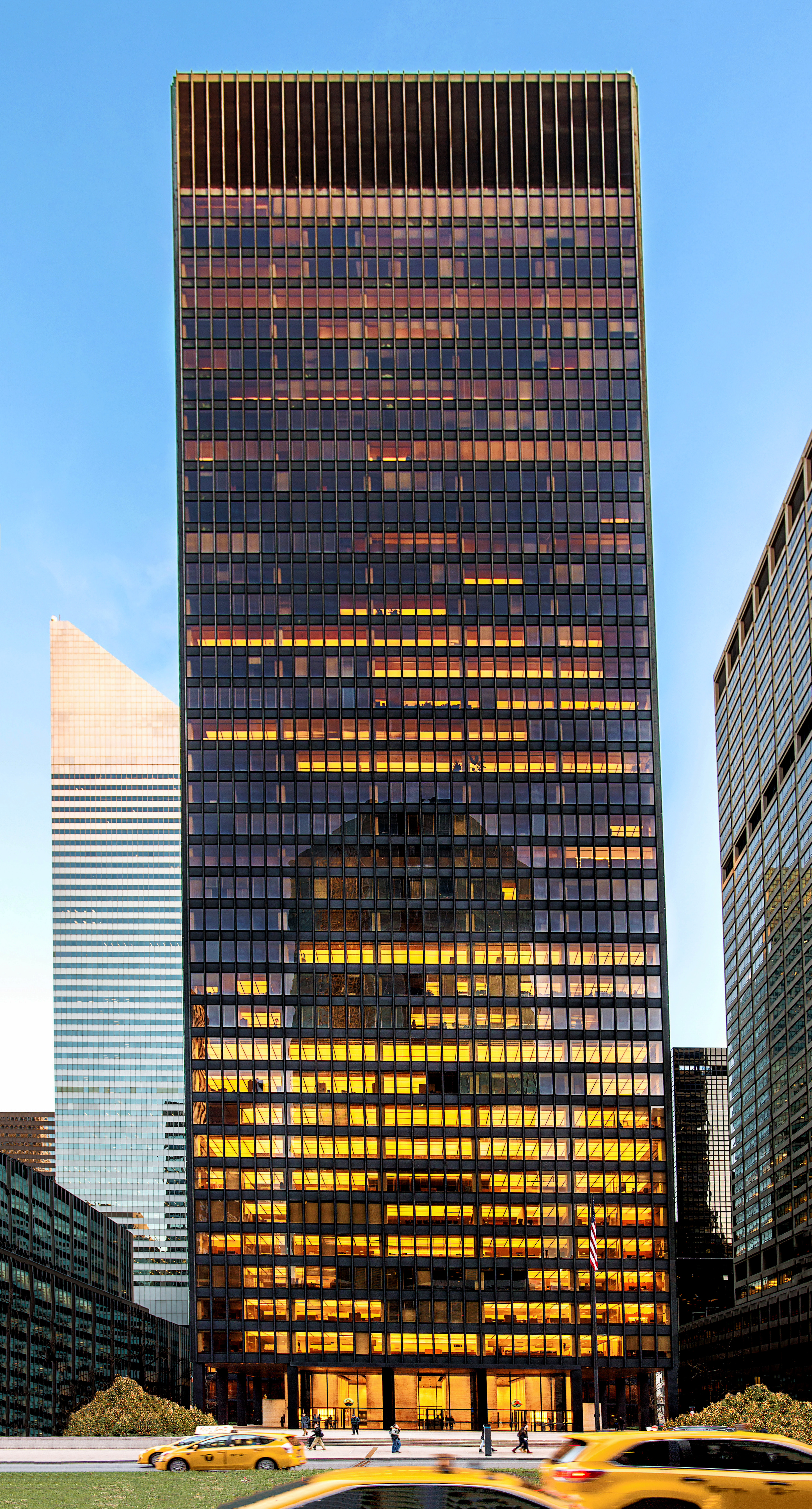 The building's conception and construction were largely driven by the idealistic, principled visions of then-twenty-something Phyllis Lambert, daughter of Seagram's founder Samuel Bronfman.  In response to a letter from her father describing his plans for the building, she penned a seven-page missive scolding, cajoling and lecturing her father on architectural history and civic responsibility. There was “nothing whatsoever commendable” in the proposed design, she wrote. “You must put up a building which expresses the best of the society in which you live, and at the same time your hopes for the betterment of this society.”  He appointed her director of planning for the project.

Among the architects Lambert rejected during the extensive selection process: Eero Saarinen, Marcel Breuer, Pietro Belluschi, Walter Gropius, Louis Kahn, Paul Rudolph, I. M. Pei, and Minoru Yamasaki.  She refused to even consider Frank Lloyd Wright, who had proposed a 100-story tower for the site;  apparently, he was a diva to work with.  Then finalist Le Corbusier was nixed, and the minimalist Mies emerged victorious.

"When a contractor tried to dissuade her from using an expensive brick bonding technique because it would be hidden from view, she channeled the aphoristic Mies, countering, 'God would know.'"

In the Richard Donner film Scrooged, Bill Murray's office is in the building.

The first building with floor-to-ceiling windows, making the wall a true curtain of glass.

It has the worst Energy Star rating of any building in New York, at 3 out of 100.

The building used 1,500 tons of bronze in its construction.

The open plaza in front of the building became such a popular gathering place that, in 1961, when New York City enacted a major revision to its 1916 Zoning Resolution, it offered incentives for developers to install "privately owned public spaces" which were meant to emulate that of the Seagram's Building.

With an entrance on 52nd St., the building houses the Four Seasons restaurant, one of the city’s most celebrated and expensive.  The restaurant, along with the buildings other interior spaces, was designed by Philip Johnson, who became a regular patron.

In 1859 a large 5-story piano factory was built on this same location by Steinway & Sons. The property was sold in 1906.

aPrevious: 1 Day in L.A.! ... my whirlwind tour of architectural Los Angeles
Next: The World’s Most Attractive Office Building b